We've all, at some point, dreamed of making it big in the Big Apple that is New York, to be admired and adored by everyone. Even great big, destructive, monsters long to be the most famous monster the city has ever seen. In King of New York, from IELLO and the King Kong of game design Richard Garfield, you can make the monster's dream come true. This standalone game is much like it's older sibling, King of Tokyo, with two to six players chucking satisfyingly chunky dice Yahtzee style in order to reach the best outcome on their turn. The best outcome in this case being what brings your monster most fame or attack points - as the only ways to win the game are by either gaining 20 fame points or by ensuring you are the last monster standing. King of New York comes with whopping monster standees and a larger playing board than it's big sis, which is split into five suburbs. Within each suburb, there are numerous building tiles that players can smash in order to gain health, fame or power cubes. All good for a burgeoning career as a monster, right?! However, be aware that once you attack a building, the military will retaliate by sending in units (on the opposite side of the building tiles) that will attack on a bad roll. The most lucrative suburb is, of course, Manhattan and players will battle it out for dominance here, but they must also be strategic in deciding when is the best time to duck out in order to heal up as they are unable to do so while in Manhattan. They also find themselves as the target of all other monster's attacks. The game comes with power cards that can prove to be game changing if the right ones are picked at the right times. Along with these power cards, players will also vie to obtain the Superstar card, which will grant the owner of it fame stars for each star rolled. But beware, this card can be stolen at any time. It's time for an almighty clash to finally decide who is the true King of New York. Player Count: 2-6 Time: 40 Minutes Age: 10+ 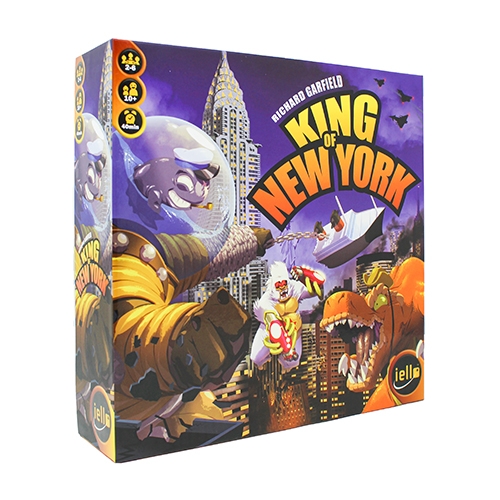