You are a merchant in Byzantium and you are trying to have the most profit from the markets inside the city. Bid for the best stock of goods and find the right moment to sell your collected wares. And do not forget to go to the main market for a good deal! Players are merchants and bid on offers from the market to collect as many sets of 3 cards of the same good. Game ends when all cards have been auctioned and clayers with the highest total of good cards wins. Cards are both: money on your hand for bidding and points for scoring in each set sold. Goods cards and merchant cards are shuffled together and form the stack of goods to be auctioned. Depending on number of players offer cards from 1 to 6 are used (eg 4 players, cards 2,3,4,5) with the highest card on top. The highest offer card is used to draw that number of goods to make the actual offer on the table. Players start with 4 goods cards in their hand as money for bidding. Players bid in clockwise order increasing their bid at least by 1 - or they pass. Last player with a bid will win the total offer. The bidding cards (= good cards from the players hand) will be placed face up and sorted by kind into the market. Also one of the cards of the offer he won has to be paid as "tax" to the market also- players choice. Than he takes all the other cards of the offer into his hand and he also places the offer card of the actual bid in front of him. He is not allowed to bid again in this round. Game goes on with the next highest offer card giving the number of goods making the new offer. So each round each player win different a decreasing number of good cards. When all offers are gone the open market is usually filled with goods. Than the player with the lowest offer card - the same player who won the most less good cards - has free choice to take all cards of one kind from the goods in the market. Often this is a really great grab! Following rounds are played the same way until all goods have been auctioned. Players can also sell sets consisting of exactly 3 cards of the same good from their hands whenever they want. That is no real sale but players hold the highest card of each set for scoring. Merchant cards can be used as a joker - even two merchants are allowed in a set of 3 goods. Although merchant cards have a value of 0, a set of 3 merchants will score 5 points! 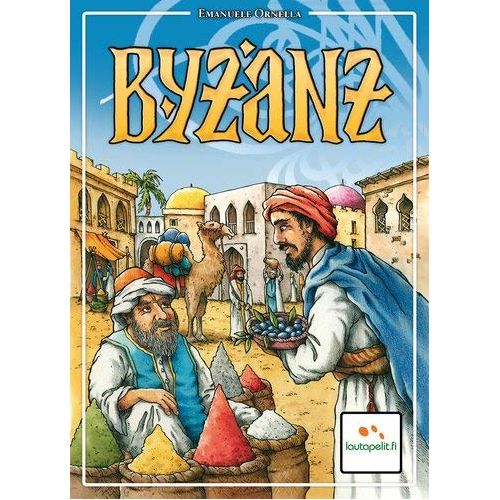